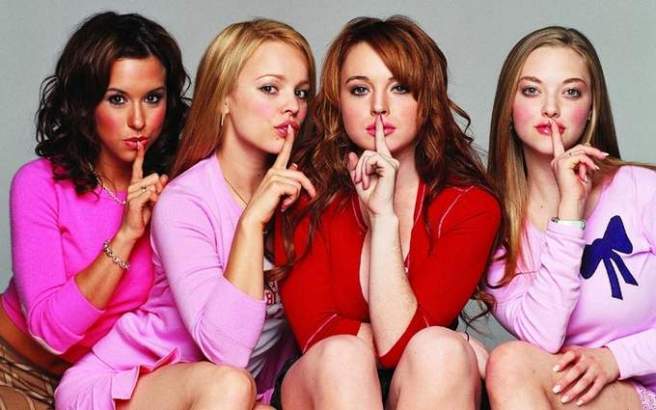 1. Some of you are probably wearing pink.

2. If you know why you’re wearing pink, you also know that it’s the 10th anniversary of Mean Girls.

After spending 12 years being home-schooled in Africa by her earthy parents, nice girl Cady is entering public school for the first time. Throughout the film are a few flashes of her old life mingling with her new life, when teenagers prove to be not much different than wild animals in their natural habitat. Cady starts out true to herself, making friends with a few fellow outcasts (goth girl Janice Ian and her “too gay to function” best friend, Damien), and even joins the Mathletes. But much like an animal brought in from the wild, Cady adapts to her surroundings and changes to blend in with her peers.

Read the rest, including 5 things you don’t know about Mean Girls: 10 years of wearing pink on Wednesdays  | The Press Democrat.

And if you’re a Mean Girls fan, leave your favorite quote in the comments! I leave you now with a clip from the movie:

Dear winter. Please go away.
Because I’m officially old, I’ve invested in some night shades. Not to look cool (though, they have that ironic nerdy cool thing going for them), but to actually make it easier to see at night. Jury is still out on how they work at night (kinda okay), but they’re wonderful for reducing the glare during the day and evening. #thisis42 #nightglasses #notanad #optix55
Just hanging out with my best friend on the first day of the 20s. Last night we hung out with good friends, eating dinner and singing karaoke until the ball dropped. Today was soaking in mineral pools and getting massages to start the year off right. If any of this is a good indication how the rest of this year will go, I’d say we’re in for a really good year. #2020vision
“Oh, so you’re one of those.” “One of what?” His eyes crinkle at the corners, his mouth slightly turns up. “A Bucket Lister.” “Excuse me?” “You know what I’m talking about. You’re one of those people who have a list of things to do before you die, except your list includes foods you never got to eat on the other side.” “I’ll have you know that I have no such list,” I say, denying my teenage goals. He thinks he’s got me pegged, but he doesn’t even know me. “I ate, slept, and worked every day on repeat until they came to take me away.” “I bet you went skydiving.” I stand up, almost knocking over my half full glass of soda. I know I’m overreacting, but I can’t help it. I’m mortified because all my reactions around him are wrong, and I’m flustered because I don’t know what to make of him. I desperately want to start over. Instead I say, “You don’t even know my name, and you’re pretending like you know everything about me. You don’t know anything.” He looks at me for a moment, and I’m frozen under his gaze. He still appears tired, but his face relaxes with amusement. “I know your name is Noelle, and my name is Ryder,” he says, putting his hand out. I fight the urge to reach for his hand, knowing I’ll give myself away if I do. To curb my impulses, I pick up my tray, making my hands unavailable. This isn’t lost on him, and I can see the laugh deepen in his expression. “I know you have 100 days from today, according to the number on the back of your neck, just like me. I know you sleep a few cots away from me and are one of the only people on our floor without a walker. I know your eyes are blue because they’re unmistakable, even from across the room. I know you’re much too young to have hair that silver, but it’s stunning on you. I know you’re scared to be here because it means it’s over. And I know you chew the inside of your cheek when you’re nervous, or someone gets too close, or you find someone attractive, or all three.” I unclench my teeth, letting my cheek go as he grins over his nearly untouched salad. “It’s nice to meet you, Noelle.” Numbered. A dystopian romance adventure. Free on Kindle Unlimited. bit.ly/NumberedKindle
It’s almost like we all went to high school together. ❤️ #classof1996
We’re super tough. Rawr. #motheranddaughter