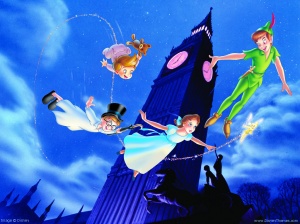 Thanks to Disney, most people are familiar with the story of Peter Pan. The universal story is that Peter Pan is a flying boy who lives with his fairy, Tinker Bell, in Neverland, an island that exists second star to the right and straight on ‘til morning. When he loses his shadow in the nursery of the Darling home, he meets Wendy, and then her brothers, John, and Michael. He brings them to Neverland where they meet the Lost Boys, pirates and mermaids. They save Tiger Lily from the pirates, party with the Indians, and battle Captain Hook. Then, with a sprinkle of fairy dust, Peter flies the pirate ship back to London and returns Wendy, John, and Michael back to their room. 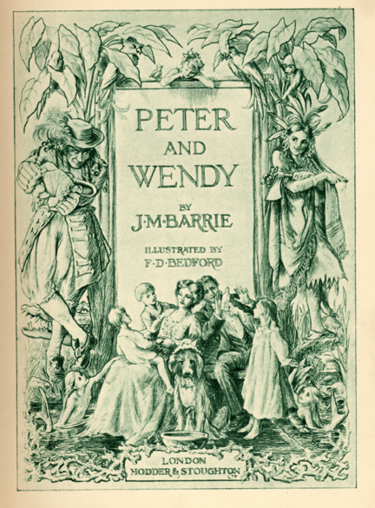 The Disney movie, and many other adaptations, were based on J.M. Barrie’s book, Peter and Wendy, which was published in 1911 (following the original play that debuted in 1904). But like many originals, Barrie’s book has so much more to it. There were stories about the Never bird, the regal descriptions of Captain Hook, the real story about how Peter came to Neverland…and the blatant racism that existed in 1911. (Of course, Disney did play up the racism in its own way. Just watch the music sequence of “What Makes a Red Man Red.)

Now, Peter and Wendy is not the only book that shows its age with sign-of-the-times racism. There’s Charlie and the Chocolate Factory (the Oompa Loompas were black pygmies that came from “the very deepest and darkest part of the African jungle where no white man had been before.”). There’s The Story of Black Sambo (Sambo was a racist expression back in the day and the book’s illustrations resembled demeaning images black people were trying to distance themselves from, and I’m also pretty sure that my grandmother read me this story once). And The Adventures of Huckleberry Finn uses the “N” word more than 200 times.

Peter and Wendy is just one of many books that holds true to the racist times in which it was written. This is particularly in regards to how Barrie addresses Native Americans in his book. They are called redskins, and they belong to the Piccaninny Tribe. Piccaninny is an offensive word that generally means “small black children.”

The most that is spoken about the Indians is when Peter rescues Tiger Lily from the pirates.

They called Peter the Great White Father, prostrating themselves before him; and he liked this tremendously, so that it was not really good for him.

“The great white father,” he would say to them in a very lordly manner, as they grovelled at his feet, “is glad to see the Piccaninny warriors protecting his wigwam from the pirates.”

“Me Tiger Lily,” that lovely creature would reply. “Peter Pan save me, me his velly nice friend. Me no let pirates hurt him.”

She was far too pretty to cringe in this way, but Peter thought it his due, and he would answer condescendingly, “It is good. Peter Pan has spoken.”

When writing Loving the Wind, my focus was to give Tiger Lily a voice, and to also shine a light on what life was like in her tribe. Where Tiger Lily only had one speaking part in all of Barrie’s book, I gave her a whole novel of her thoughts, her feelings, her values, where she came from, and so on.

I also aimed to strip the story of racism. Instead of the Piccaninnies, Tiger Lily’s tribe was the Miakoda Tribe. Miakoda means “power of the moon,” and is of Native American origin. Because the moons (yes, there are more than one) play a central part of Loving the Wind, it was only fitting that Neverland’s tribe would be named after them. I also never describe the tribe as Native American or Indian at all, letting that be up to the reader. Sure, there are similar themes to Native American culture. But I wanted to separate these people from the tribes of America. After all, they live in Neverland, not America. Even the names of their homes have changed—instead of wigwams, the tribe lives in “yinshaws.”

I also explain the whereabouts of Tiger Lily’s mother. Neither the book nor the Disney movie addresses where her mother is. Loving the Wind shares how Tiger Lily’s mother actually died a few years back, just when Tiger Lily was nearing the age of young womanhood. This, obviously, would affect a young girl who was constantly at the center of attention because of who her father was.

One of the things that I kept the same as the book, that the Disney movie stripped out, was the story of the Never birds. These birds play a central part in the very beginning of the book. Here’s an excerpt:

From where I sat, the top of the forest spread out all around me, blanketing this part of the island in a sea of green. I could see birds fluttering in and out of trees, playing hide and seek as if all life were a game. I whistled to them, practicing a birdcall I had once heard Lean Wolf use. The birds paused, then scattered with the wind. Frustrated, I tried it again. Then I listened. Silence. And then, faintly, I heard one solitary bird mimic the tune I just whistled. I tried it again, and was met with a few more songs from the birds. The third time, the birds burst from the trees, singing the song repeatedly, incorporating it in their play. I grinned, but then caught my breath when a brilliant Never bird, the size of three large horses, erupted from the tree in an explosion of color. It soared overhead, calling out the song I had sung, searching the canopy for the song’s source.

Look for a few more Never bird appearances as you read the story.

One character that I mentioned above, Lean Wolf, was also mentioned in Barrie’s book—but just briefly. I won’t completely give it away, but let’s just say it didn’t end well.

In Loving the Wind, Lean Wolf is the strongest, bravest warrior of the tribe. He also has a thing for Tiger Lily. Unfortunately for him, the feelings aren’t mutual. The thing is, he’s a bit sexist and chauvinistic—a result of growing up in a chauvinistic culture. Tiger Lily’s tribe lives by strict gender roles—the men go hunt and provide; the women stay home, tending camp and watching over the children. Lean Wolf has a good heart, but these are the only roles he knows how to live by.

And, these are the very roles that Tiger Lily is trying to escape.

And that is just a smidge of what you can expect from Loving the Wind.

If you’re curious about the original story of Peter Pan, I highly recommend reading Peter and Wendy. If you can look past the racism of the times, the story is full of adventure and imagery, and the theme of never wanting to grow up is one that almost everyone can relate to. And, of course, I hope you’ll pick up a copy of my book, Loving the Wind, and find out more about Tiger Lily’s story.

I’ll be reading from Loving the Wind this Saturday at Gaia’s Garden in Santa Rosa from 2-4 p.m. If you’re in the Sonoma County area, please stop by and take a listen. See upcoming events for more information.

2 thoughts on “Loving the Wind: Peter Pan and the blatant racism of 1911”

This month marks 8 years as a published author, and it all started with my first book, A Symphony of Cicadas, and its companion novel Forever Thirteen. All my stories are special to me for different reasons, but these two will always be close to my heart.
Last weekend, my husband and I enjoyed a getaway in Joshua Tree. The inspiration was for research for my next novel, but it didn't hurt that it was just the two of us, camping out under the stars. Here are a few photos from our trip, just so you can see how gorgeous it all was. (Expect more photos plus a blog entry sometime soon, because I have stories!) #joshuatree #joshuatreenationalpark
Oh, hello gorgeous day. Not pictured are the goose poop bombs I dodged on the way to taking this shot.
I guess journaling time is over. 🐱 👑
Happy Valentine’s Day! I don’t write a lot of poetry, but this one I’ve always loved. You can find it in my little known book, Everything I Am Not Saying.
Early morning hike. Worth it. 🌞