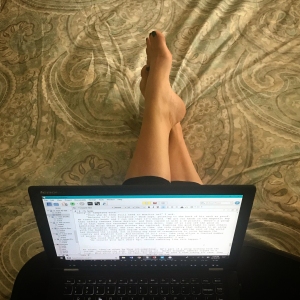 A few years ago, I was shopping at Trader Joe’s when I saw every parent’s nightmare unfold in front of me. A woman was gathering fruit from the bin while her toddler stood in the large part of the grocery cart. Without warning, the cart tipped and the toddler fell to the ground. The mother immediately swooped up her screaming child, consoling him while shoppers moved around them. Some people stared, and some were completely oblivious to what happened. I placed myself in her shoes, feeling her shame from any judgment over letting her son be in that part of the cart in the first place, and her worry over her son who could have been hurt much worse from the fall. Then the questions began forming in my mind. What if it was much worse? What if her son didn’t survive? As a mother, what would her identity be if her only child passed away?

That scene inspired my book, The Road to Hope, a story about Jill, a mother who loses her son to this very accident. This story also introduced an accidental character—Maddie, a pregnant teen who crosses paths with Jill. I continued the series telling Maddie’s story, infusing pieces of my life into hers, a process that allowed me to grieve and heal from experiences I’d been stuffing.

I pull inspiration for my stories from many different places. Sometimes it’s from something I witness—like the grocery store scene—that leads me to scenarios and characters that grow by just asking myself questions. Sometimes it’s from overhearing a conversation, which prompts me to fill in the gaps. Sometimes it’s inspired by moments from my life that I need to work out in fiction. And sometimes the story comes from a dream.

My first published book, A Symphony of Cicadas, was based on a dream I had while I was planning my wedding. My greatest fear at that time was that something would happen to me before I got to marry the love of my life. Because of this, I had a dream where I died in a car crash. But instead of waking up as soon as I died, the dream continued, showing how all the people I loved were moving on after my death, including my fiancé. I watched as my fiancé met and fell in love with another woman. As I witnessed this, I experienced a small bit of wistfulness. But mostly, I felt this immense rush of peace because he was happy and I knew he was going to be okay. I woke up crying, and the whole book began flowing through me. I couldn’t outline it fast enough.

This kind of dream inspiration happened again with Numbered, the book I’m currently writing. At the time, I was at a crossroads in my writing life, wondering if I had any more books in me. But then I had this dream. All I saw was a man’s face, but I knew his whole story. He was dying from cancer, despite looking completely healthy, and he knew the exact date of his death. I woke up with a question—what if everyone actually knew the date they would die? How would that affect the way they live? The story began flowing through me and I ran downstairs to get it down before I lost it, spending two hours outlining the novel, and describing the characters and their backgrounds.

Inspiration can some from anywhere, you just have to pay attention and be ready to receive it when it comes calling. In Bird by Bird, Anne Lamott shares how she carries index cards everywhere, ready to write down conversations, moments, anything that comes to her while she’s out and about because inspiration rarely comes when it’s convenient. Nowadays, you don’t even need index cards if you have a smartphone, because it’s just as easy to jot it down in your phone’s notes or even record it as a voice memo. Inspiration likes to hit me while I’m driving, which is an awful time for it to arrive. I can’t tell you how many stories I’ve lost because I didn’t pull over immediately and get it down. By the time I reach a convenient moment, all or most of the story has already gone.

One of my favorite stories about the way inspiration works is how Liz Gilbert shared in her Ted talk about the late American poet, Ruth Stone, and how a poem would come barreling at her over the landscape. Ruth Stone’s job at that point was to drop everything and race for a pencil because if she didn’t, the poem would flow in and then out of her, searching for another poet who was ready to receive it. Watch it below (it’s less than 2 minutes long).

Have you ever had a moment when inspiration struck you when you least expected it? What did you do to make sure you didn’t lose it?

Crossed an item off my bucket list with a whale tour! Shawn surprised me with this gift at Christmas, and we cashed it in today. The weather was epic, and we saw a grey whale, a humpback, seals, sea lions, and porpoises. It was a perfect day.
Just hanging out at work in the cutest shoes ever! A huge thank you to @soledesire for these beauties! I won these free in one of their Instagram contests!
I title this one “Motherhood.”
Camping expands my soul.
What is it about cats? All Cleo has to do is sit behind me, and I’m suddenly *the chosen one*. If you need me, I’ll be here until she moves.
The paperback version of Numbered is on sale for $7.63, and Amazon says there are only 4 copies left. Who wants them? I have no idea how long this will last, but I wanted you to be first to know! Here's the link: amazon.com/dp/0996771778