The rough draft of my novel is done!  Notice the new title, changed from ‘After Life’ to  ‘A Symphony of Cicadas’.  I mulled this one over for awhile.  Cicadas play a large role in the story, and it became a must that they be a part of the title.  The title I actually wanted was “Songs of the Cicadas’, but someone already nabbed that one for a book of poetry.  I may just buy that book, just because.

After re-reading everything I wrote and correcting all the errors and typos that were glaring out at me (I actually switched the order of birth between two sisters halfway through!), I finally printed the book out yesterday.  All 172 single-typed pages.  I can’t describe what it felt like to hold that many words in my hands, words I had pored over these last 6 months and that now created a story I’m really proud of.  While it’s tempting to read it again and totally dissect it to pieces, my next step is to actually have my husband read it and give me feedback on it as a reader, allowing me to clean the story up and tighten up any seams.  After that, my mom will take a stab at it for my third and final rewrite.

After that….  I’ve decided to do two things.  I have not given up entirely on getting an agent and being traditionally published.  There is actually an agent I have in mind, and I plan on writing him and telling him what an honor it would be if he would be the one to represent me.  If he doesn’t work out, then I will send out dozens of letters to all sorts of agents.  And I will also go forth and self-publish as I shop for an agent and hopefully a publisher.

I believe in this book. 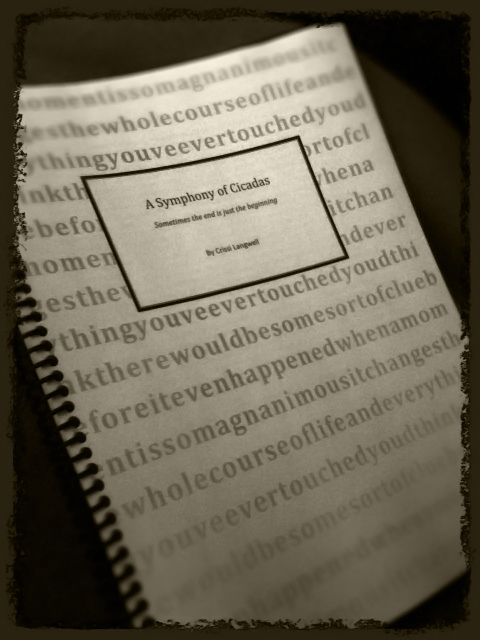 I can’t wait for you to read it.  I’m so tempted to post a sample chapter here, and I may just do it to hook you in, so you can see exactly what I mean about this story.  In the meantime, let’s all cross our fingers that someone will recognize that this book belongs on shelves across America!

One thought on “A Symphony of Cicadas – DONE!”