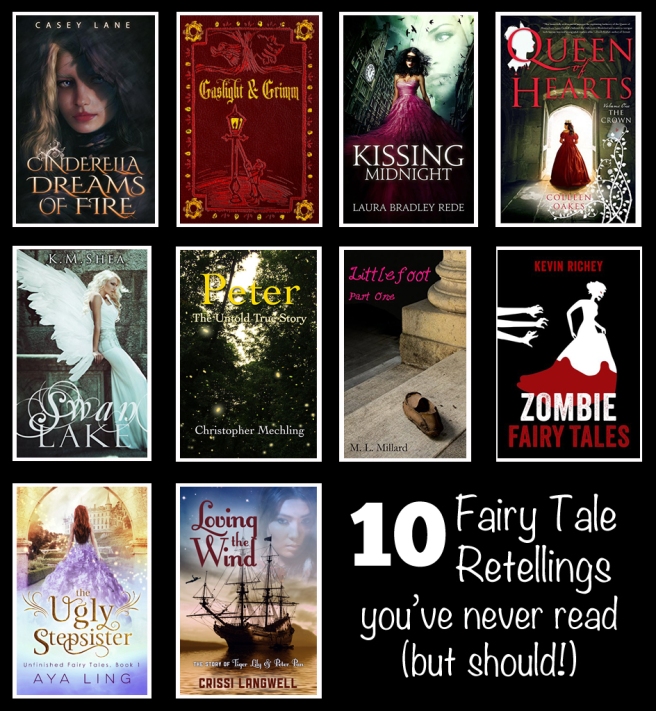 Fairy tale retellings are nothing new. Don’t believe me? Think of “Hook” with Robin Williams, “Snow White and the Huntsman” with Charlize Theron, “Ella Enchanted” with Anne Hathaway, and many, many more. And with the next season of “Once Upon a Time” starting this Sunday (can’t wait!), fairy tale retellings are even more popular right now.

The book world is no exception. Marissa Meyer made it big with The Lunar Chronicles, a series of books that started with Cinder (for Cinderella), then Scarlett (for Red Riding Hood), and so on. Then there’s Peter and the Starcatchers by Dave Barry.

Cinderella Dreams of Fire, by Casey Lane. What if Cinderella wasn’t some nice young girl forced to the bidding of her stepmother, but lives a secret life? In Casey Lane’s version of this epic fairy tale, Cinderella is no ordinary girl. By day, she does her stepmother’s bidding. By night, Cinderella is a thief with no match. But a chance encounter with the prince complicates her mission. Worse, he wants to join her in her lawlessness.

Kissing Midnight, by Laura Bradley Rede. A modern day retelling of Blackbeard, the immortal Deveraux Renard must make a girl fall in love with him every New Year’s Eve, or he dies. Her kiss will allow him to live one more year. It will also end her life. This year, his life is in the lips of Saintly, a girl who is crazy about her new boyfriend. But Saintly has a secret – she sees dead people. And one dead girl has a secret she’s dying to share.

Queen of Hearts, by Colleen Oakes. Before Alice fell down the rabbit hole, there was Princess Dinah. As the future queen of Wonderland, Dinah dreams of approval from her father and a future with the boy she loves. But a betrayal breaks her heart, threatening her path to the throne, and sending her toward her dark future as the Red Queen.

Swan Lake, by K.M. Shea. This author, by the way, is pretty prolific when it comes to fairy tale retellings. Swan Lake is just her latest in the 7-book Timeless Fairy Tales series. In this story, Odette is cursed to be a swan by day, and the guide to smugglers at night. There seems to be no way out. But when a handsome prince finds his way into her heart, Odette not only finds hope, but must make a choice between fulfilling her responsibilities or fighting beside the man she loves.

Peter: The Untold True Story, by Christopher Mechling. More a historical novel than a retelling, Christopher Mechling shares the possible inspiration behind Peter Pan, describing the adventures of a real wild boy who came to London, and the people who cared for him. While no magic exists in this story, the story is magical all the same.

Littlefoot Part One, by M.L. Millard. What if Cinderella never wanted to go to the ball? In this fairy tale novella, M.L. Millard offers a comical take on stories of Cinderella, Rapunzel, Little Red Riding Hood and more in this first book of an upcoming series. As a devoted follower of her blog, I’ve fast become a fan of Millard’s writing style.

Zombie Fairy Tales, by Kevin Richey. What could make fairy tales better? Zombies, obviously. Fairy tales take a dark and twisted turn in this 12-story collection of your favorite characters who come back from the dead.

The Ugly Stepsister, by Aya Ling. After ripping up a childhood book, Kat is accidentally transported into the story of Cinderella. Worse, she’s one of the stepsisters! To leave, she’ll have to complete the story to its original happily ever after. But when the prince turns his attentions toward her, her HEA may never come.

Loving the Wind: The Story of Tiger Lily & Peter Pan, by Crissi Langwell. A must-read for Peter Pan fans, written by yours truly! Neverland is seen through the eyes of Tiger Lily, sharing about her life as the chief’s daughter, her dreams of being a warrior, her battles with the pirates, and the moment she meets the legendary Peter Pan and learns he’s nothing like the stories she’s heard. But soon she discovers his true story, and a secret that could end Neverland forever.

Do you have a favorite fairy tale retelling? Share in the comments!

Crissi Langwell writes romance, women's fiction, young adult novels, and more. Her passion is the story of the underdog, and her stories include ones of determined heroines, family issues, free spirits and more. Beyond writing, Crissi is an avid bookworm, loves to meditate, and has tiny muscles from weight lifting. You have to look closely. She pulls her inspiration from the ocean, and breathes freely among redwoods. Crissi and her husband are both Northern California authors with day jobs. Currently they are kicking their kids out the nest (2 down, 1 to go!), and can't help spoiling their beautiful, bratty Maine Coon cat. View all posts by Crissi Langwell

My dad and me. ♥️
I’m lucky to have two dads in my life who take being a father seriously…but not too seriously. I love you @shawnlangwell and dad! Happy Fathers Day!
Today on the blog, I shared my Joy List. My spirit band Bon Iver made the list, and so did my spirit animal Cleo. 🌸 What’s on YOUR list? 🌸 You’ll have to read my blog to see what else made my list, and also discover the latest ridiculous way I’ve spoiled my princess cat. ✨Link in profile✨
Now that the cicadas are waking from their 17-year nap, it’s a good time to read A Symphony of Cicadas. This novel takes place in the space between life and death, following the afterlife journey of Rachel who’s forced to let go of everyone she loved, including her fiancé John. As for the cicadas, well, I hear they taste good barbecued. They’re also less annoying in this novel than they are in real life.
Friendly advice to a lot of young woman, and a lot of old women, too (a poem in the style of Bukowski)
For Mother’s Day, my son @lucdilly started my collection of @boniver vinyls because they’re my favorite. 🥰 I think I raised him right. #bonivervinyl #boniver